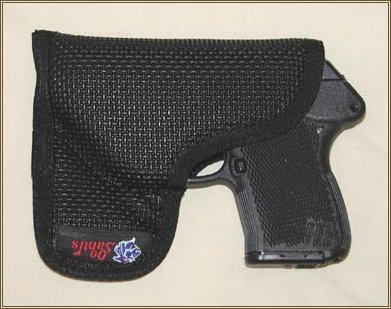 I have carried a Kel-Tec P32 pistol daily for over five years.

The P32 is a lightweight pistol (at only eight ounces unloaded).  It is underpowered (.32 ACP is generally considered to be an inadequate stopper in defensive use).  How good is it really, and under what situations would it be useful for defense?  Let's look for a moment at the gun itself, and then at its possible defensive uses.

Let me start by saying that I am not here to sell anyone on the idea that the P32 and other similar "mouse guns" are all the gun you need.  Any handgun is an imperfect stopper--the basic concept of defensive firearm selection is to get a combination of both the biggest, hottest caliber you can handle and a handgun in which you can handle that load well.  I actually do something like that--I generally carry a .40 caliber SIG P239 when out and about, and my P32 as well.

The Kel-Tec P32 is a polymer-frame semi-automatic pistol.  Actually it has a 7075-T6 aluminum sub-frame within its plastic housing but still is generally considered to be polymer-framed.  At only eight ounces in weight, five inches in length and less

than 3/4 inch thick, it carries eight rounds, slips into my front jeans pocket with ease and rides there in its DeSantis Nemesis pocket holster like a feather.  My P32 has drawn no untoward attention in the five-plus years I have carried it like this!  Firing from a locked breech, its recoil is very moderate.  Its double-action-only (DAO) trigger is fairly heavy (editor: the P32 I once owned had a trigger pull no more than 6-7 pounds, fairly light for a DAO auto trigger), as befits a defense gun with no other external safety mechanism, but I have pulled many heavier.  The rudimentary sights allow fairly accurate aimed fire for such a small package but its more probable usage would be at point-blank range.  Today, the very similar Kel-Tec P3AT might be considered as a better choice, simply because it fires the more powerful (but still marginal) .380 cartridge.  I never felt the need to upgrade when the P3AT came out, though--a mouse gun is still a mouse gun.

I initially carried my P32 with Winchester Silvertip hollow-point defense ammunition.  My particular gun has fired 60 grain Silvertip bullets at an average 866 fps instrumental velocity.  Is that enough to reliably expand a 60 grain hollow-point?  Probably, but that question misses the point.  Will hollow-point bullets of such little weight penetrate deeply enough to stop aggression, especially when expanded?  That's the question that should be asked!

Concern over adequate penetration has led me to also try the S&B 73 grain full metal jacket cartridges.  They, curiously enough, chronographed at an average of 871 fps out of the same gun, almost identical speed to the Silvertips.  With the velocities of

these two different loads so close, it is possible to say that both the energy and momentum of the S&B load are 22% higher than the Silvertip load.  The increased penetration this suggests from the S&B load was more than enough reason to switch from the Silvertips, but realize this: even with its greater power, the S&B load produces less than half the momentum of most .38 Special cartridges and the .38 is considered by many to be the base level for effective defensive ammunition!

Reliability with both of these loads has been outstanding.  In fact, the only time my P32 bobbled at all was when it was brand-new and I was firing the cheapest ammo through it that I could find to break in the gun.  After one or two failures to feed, I polished the feed ramp lightly and the gun has been absolutely reliable ever since.  Was that initial problem due to poor ammo, the need for break-in, my unfamiliarity with the gun or a rough feed ramp?  I really don't know, but the gun is reliable now.  The lesson to be learned from my experience is to never just load a gun and stick it in your pocket for carry.  Shoot it enough to be sure that you, the gun and the ammo are all up to speed.  Find out about possible problems in the safety of the range, not on the street!  But of course you knew that already, didn't you?

The P32 is my "Always Gun", a name invented by some gun writer (Jerry Ahern?  It has been a long time since I first read of this concept) and picked up by many others.  The Always Gun is defined as a gun so small, light and unobtrusive that it will always be with you - from the moment you pull your pants on in the morning to the moment you hang up your pants before snuggling into bed at night.  For an Always Gun, power and accuracy are secondary to convenience.  The Always Gun is the physical embodiment of that trite expression "Better too little gun than no gun at all!"  The basic idea behind the Always Gun is that it can be used to fight your way to another, more capable, weapon if needed and will remain as a backup to your main carry weapon when you do carry something stronger.  The P32 was my ideal Always Gun when I bought it, although the P3AT might be a better choice today.

Cautions about its use?  There are many.  A mouse gun still is recognizable as a gun but may have less intimidation power than larger, meaner-looking weapons.  It certainly has less stopping power. Shots to the body may not penetrate to the major organs and head shots can more easily glance off the skull.  The only sure stopping shots with such a puny cartridge are widely considered to be those which take advantage of existing skull orifices--the eyes, ears or nose.  It takes real expertise and calmness to bring off such shots.  Anything less is a crap shoot!  Whether or not such a gun will suffice for you depends a lot on both your skill and the determination of your opponent, even more so than with a larger-caliber handgun.

In view of these very real limitations, when might it be appropriate to carry a P32?  Well, always--weren't you listening?  In particular, there are a number of situations that make such a gun a reasonable, if not comforting, choice:

The first is when backing up another gun.  Few of us can carry two full-sized major-caliber handguns concealed.  Nor would we want to unless we were heading into certain battle, and why on earth would we do that if forewarned?  A small, light back-up like the P32 is better than nothing if your main armament has a terminal malfunction at just the wrong moment.  Another unique backup use of such a small weapon is when a potentially dangerous situation is unfolding but hasn't yet proven itself to be a deadly force encounter.  One certainly needs to be prepared, but not overtly so.  A P32 can conceal in the hand and be instantly ready if things go sour, where a larger gun in hand is likely to be seen and might be considered as an unwarranted provocation when that happens.  Being able to instantly use the P32 in hand while you are accessing the more serious weapon on your belt could provide the necessary buffer between being ready and being unreasonably threatening.   Just ignore the temptation to go forth armed only with the P32 when you really should be carrying stronger support.

A second legitimate use of the P32 would be when there is absolutely no way to conceal a larger weapon.  It is always appropriate to dress for the gun you want to carry rather than to carry a gun to suit your dress style, but sometimes you just can't.  A P32 might actually fit in the small pocket some bathing suits have--try that with your 5 inch-barreled 1911!

Fourth is something I will simply call "because you can" or the Badge of Office Syndrome.  Some of us recognize the value of and even fought to win a right to legal concealed carry.  We will carry just because of that right, even when as safe and sound as a baby in its mother's arms.  For that one purpose alone, a .32 is as powerful as a .44.  It is a reminder every moment in the day of what we have that so many others don't.  I fit that mold much of the time and maybe you do, too.

So am I crazy to carry the P32?  You tell me!  I know it is lacking in many ways as a defensive firearm, and it certainly isn't designed to be a target or sporting arm, but used with a full understanding of its limitations, I do believe the P32 has a place in the defensive battery.

Update 2020: Still crazy after all these years--my P32 remains in my pocket all day every day after almost fifteen years!

copyright 2006 by the author and The Firearms Forum, all rights reserved