The .45 caliber is incredibly popular as a self-defense pistol cartridge, and since 1905, ".45" has meant ".45ACP."  While the 1911-style pistol, the premier platform for the .45ACP, is as popular today as it has ever been, there has been a growing demand for "modern" pistols ever since 1975 or so, starting off with pistols such as the HK P9S and the SIG Sauer P220 double-action.  The move to double action, high-capacity autos in the 1980s saw the demand for more .45 autos grow and more manufacturers offered .45s.  With Glock leading the way with polymer-framed, striker-framed pistols and most other makers coming out with similar pistols in the 1990s and in this decade, the demand for high-capacity .45s in the latest pistol packages grew to a fever pitch.

While Glock is the most popular of the striker-fired modern pistols, Glock themselves could not wrap up the .45 caliber market for one major reason--their pistols were simply too large for the hands of most shooters.  Glock fans were not happy and only those with large hands or those who were both rabid Glock fans and rabid .45 fans bought and used the big Glocks.  In the meantime other companies tried to fill the void.  There were lots of offerings but there were really no comfortable double-stack .45ACP pistols.  Para-Ordnance had come out with a double-stack 1911 frame initially, then complete pistols, in the very early 1990s, but the first ones were extremely fat-gripped pistols, and they were not DAs, nor were they polymer, nor were they anything but 1911s.  Most 1911 fans were traditional types who saw no need for high-capacity .45 autos and Para was popular mostly in the competition arena.  Other makers did have some success, notably HK, but the cry for a smaller Glock .45 continued to go out.

The first move in that direction was the Glock Model 36, the "Slim-line" compact model.  The Glock 36 is nothing more than the Glock Model 30 that has been narrowed significantly.  To backtrack, the Glock 30 is the compact version of the full-size, large-frame Glock Model 21, the pistol which doesn't fit many folks, and the Glock 30 shared this same attribute--it was shorter but just as fat-gripped and with just as long a trigger reach.  The Glock 36 was so much thinner it was in fact a Glock .45 that most people could handle...but there was a big problem in many people's eyes.  The Glock 36 was no longer a high capacity pistol.  It held only six rounds in the magazine, the same as a Colt Officer's ACP.  While it was a Glock, and a .45ACP, and not monstrously huge...it wasn't what Glock people by and large were hoping for.  While it remains in the line-up it will always be the oddball Glock to many Glock fans: 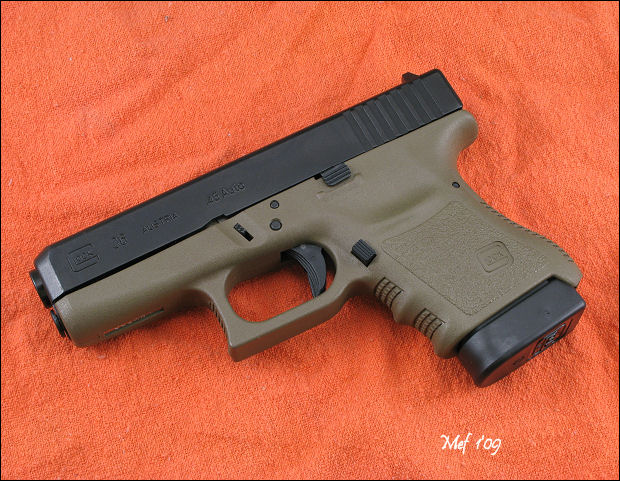 The .45GAP uses the same bullet as the .45ACP and the cartridge is available in the same bullet weights as the .45ACP at the same velocities.  Because propellant technology has progressed so much the technicians at Speer were able to create a round with a much shorter case that could achieve the same velocities as the .45ACP with only a little increase in pressure.  The .45GAP SAAMI Maximum Average Pressure is the same as the SAAMI MAP for the .45ACP +P cartridge.  This is significant as both are significantly lower than the pressures for either the 9mm or the .40S&W, meaning either .45 is much easier on pistols than the smaller rounds.

The .45GAP case (GAP cartridge shown to the left of the ACP cartridge in photo at right, above) is shorter than both the .45ACP case and the .40S&W case, and is in fact about the same length as a 9mmP case.  The value here, the entire point in fact, is that the .45GAP can be packaged in the exact same frame as is used for the Glock 9mm/.40S&W pistols, and of course, any other maker's 9mm/.40S&W pistols.  Glock had to make the .45GAP slide a little thicker, making the overall pistol a little heavier, but with the Glock Model 37 full-size pistol they finally had a Glock that was a .45, was a double stack, and was a Glock that would fit just as many hands as their very popular nines and forties.  Magazine capacity was ten.  Not great but respectable, and there were other double stack .45s out there in the same capacity range.  And this was a .45.  Glock called the Model 37 "full power in the perfect package."  (They do like that word "perfect.") It wasn't too long before Glock followed the Glock 37 with the compact Glock 38 (8+1) and the sub-compact Glock 39 (6+1), all on the standard frame.  Other companies also offered pistols in .45GAP, most notably Springfield Armory in their Glock-like XD, and some 1911s.

For a couple years it seemed as if maybe the .45GAP was the answer to what had been asked for for so long--an ultra-modern, high-capacity, .45 caliber pistol.

Moving forward a couple more years, Springfield Armory now offered their XD in .45ACP.  It held 13+1 rounds, and unlike the big Glock 21 in .45ACP, it really wasn't too much of a handful for most people.  Slowly, Springfield cut back on the .45GAP versions of the XD.  I haven't been able to find the XD in .45GAP from Springfield lately.  Para offered some .45GAPs but I believe those are gone.  When Smith & Wesson became the third member of the "Big Three" in the polymer pistol race, they never even offered any models in .45GAP.  What was happening here?

Then a couple years ago, Glock themselves made a startling announcement.  After so many years of doing nothing about their large-frame Glocks (G20, G21, G29, G30--the .45ACPS and the 10mms), they announced the new G21SF or Short Frame.  By redesigning the internal module that held the trigger mechanism they were able to change the frame to shorten the trigger reach just enough to make a significant change in the feel of the pistol--especially when shooting it.  Not huge in terms of absolute measurements but enough that suddenly a lot of people who were never going to buy a large frame Glock--your writer included--suddenly did--and liked 'em.  This was followed by a Short Frame G30 (and announced versions of the 10mm large frame pistols as well--which since this article originally appeared, have made it to the marketplace and have been very popular).

So where does this leave the Glock models 37, 38, and 39, and more importantly, the .45GAP cartridge?  Glock continues to catalog and build these pistols.  I suspect they will do so for the foreseeable future, just as they continue to build the G36 Slimline pistol, a niche Glock if there ever was one.  But I don't see a rosy future for the .45GAP cartridge.

Ultimately I don't think the .45GAP was ever going to have the success of the .40S&W.  The .40S&W truly fit into a 9mm pistol package at the expense of normally only two rounds in the magazine--but we're talking magazine capacities of fifteen or more rounds in .40, clearly still high capacity.  And the .40S&W balanced that out with more power than the 9mm at the same SAAMI pressure levels, and with no such thing as a bad forty caliber round versus the 9mm's reputation for being ammo dependent when it comes to self-defense.  For example, no right-thinking shooter will load 90gr 9mm rounds in a self-defense pistol, and the first generation 147gr 9mm loads were generally bad news.  In .40S&W you can load up Cor-Bon 135gr rockets or the 180gr JHPs that work like 185gr .45ACP loads, and both will get the job done...or any loads in between.

Conversely the .45GAP pistols were not exactly the same as the 9mm/.40 Glocks...they were a little heavier due to that heavy slide. 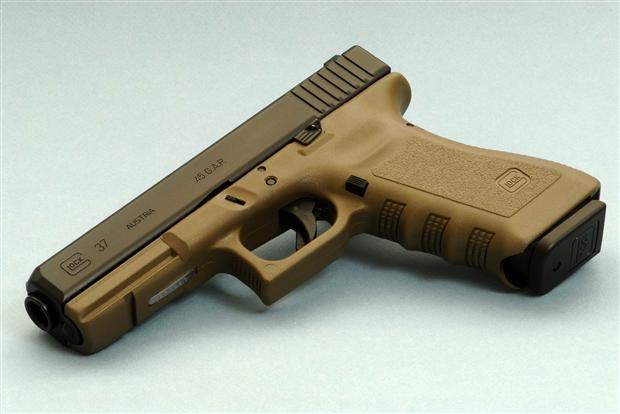 More importantly they only held ten rounds in the mag and that was the full-size pistol.  Remember, the guys wanting a Glock .45 were guys who were 100% into the modern pistol thing.  If they wanted a "low capacity" pistol they could have a 1911 with an eight-round mag, or a SIG P220.  They didn't want a 1911 or a SIG, though, they wanted a polymer-frame, striker-fired pistol with lots of ammo.  Springfield was offering them one that seemed as good as a Glock and held 13+1 rounds of real .45ACP ammo.  That was another problem.  .45GAP ammunition was kind of pricey, and not that easy to find.  You and I know that is to be expected when a new round is introduced but people don't like excuses, and they didn't like paying a couple bucks more for GAP when they could get ACP for less...and they wanted ammo for their gun to be on every shelf, dangit.

I liked the .45GAP when it came out because the standard Glock frame fit my hands but the large Glock frame didn't.  I didn't buy one however because as a handloader who owns several .45ACP pistols and always will I couldn't see the hassle of managing both types of brass.  I suspect that was another problem with the less than universal acceptance of the GAP cartridge.  But the bottom line for me gets down to the reality that as much as I love the .45ACP, I don't think it is the end-all and be-all of self-defense cartridges.  Some guys don't think they can survive a lethal encounter without a .45 in their hand.  I'm not one of them.  I happen to think the .40S&W is just as good, and truth be told, ultimately it's the shooter.  But this is about hardware, not shooters or shooting, so we'll leave that one lay.

I think the .45GAP is going to fizzle out.  Glock, with its world-leading line of handguns, can probably keep the cartridge going just by producing its Models 37-39 for years to come, and in fact several very large police agencies do issue these pistols, which has got to help, but I seriously doubt we'll see any new models from other makers.  I think the introduction of the Glock Short Frame versions of the large frame pistols is tacit admission that there is still a large market for the higher capacity .45s--and for "real .45ACPs" while we're at it.  Americans are a traditional bunch, and I think a rose by any other name does not smell as sweet--despite the fact that there is absolutely no difference out the muzzle between the .45ACP and the .45GAP.  6 Sep 09