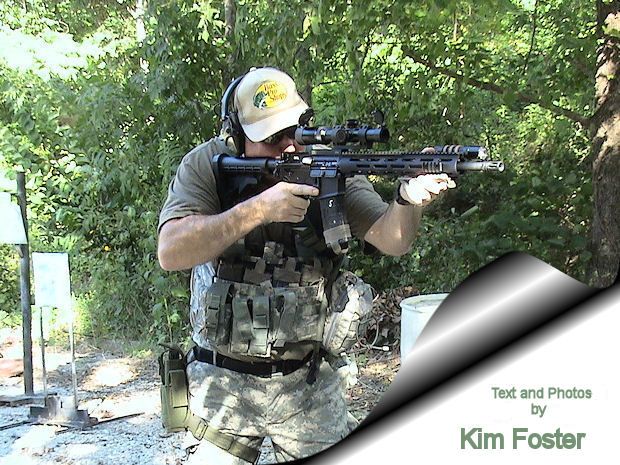 In May of 2010 I purchased another AR-15. There were a couple new items I wanted to try out, including a free-float tube as opposed to standard handguards and a low magnification variable scope. The rifle was put together around these things. I started with an assembled lower from Spikes Tactical. The lower was properly assembled with good fit and finish. It mated up to the upper perfectly. Trigger pull weight and feel is average. The only negative aspect of this lower is that the mag well is a little tight. Some P mags won’t drop free. This problem is easily correctable by lightly sanding the sides of the problem magazines. USGI mags work perfectly.

For an upper, I went with a Bravo Company USA (BCM) 16" upper with a VTAC free float tube. This upper has a mid length gas system, meaning the gas tube is two inches longer than a standard 7" carbine tube. The extra two inches gives the rifle a slightly softer recoil impulse and causes less wear on the action parts. The bolt carrier group is also BCM.

For optics, I got a Weaver Super Slam 1.5-6X24. It has an illuminated dot and a #4 reticle consisting of three thick cross hairs and a thin upper cross hair. Low power variables have become very popular on AR’s. The 1 or 1.5 magnification can be used for close range defense while the higher magnification is useful for more precise shots at distance. Since you cannot use back up iron sights though a magnified optic, even a 1.5, I mounted the scope with a Larue SPR-E quick release mount. The optical clarity and light gathering ability of this scope are very good. Initial sight in went smoothly without any issues. Turret adjustments are precise enough and so far, it holds zero well. After sighting in at 50 yards, I moved to 100 to shoot some groups. This is where things ceased to go smoothly. Initial groups were around five inches. The wind was howling with 40 mph gusts, so I quit for the day. My second attempt wasn’t much better. I started checking for potential problems and discovered that the pistol grip screw was loose. I had planned to replace it anyway and took that opportunity to install a Magpul MOE that I’d just received. I also had to tighten the two bolts holding the free float tube to the barrel nut. Once they were tightened and Loctite'd things improved. I should have checked all the bolts for tightness before shooting the gun. But, in handling it, I didn’t notice any movement, so I made the mistake of assuming everything was good to go. Lesson learned. BCM is a small semi-custom outfit with a good reputation for quality. Their barrels and bolts are high pressure tested and magnetic particle Inspected, just like Colt. This BCM upper is very particular about the ammo it will shoot accurately. Below are the average size for several 3 round groups at 100 yards, from a bench rest:

Many 1:7 twist barrels do not perform to their potential with 55 grain FMJ. However, I’ve gotten excellent accuracy from Federal American Eagle in every AR I’ve shot it through, except this one. At this point, I’m getting around 3 MOA with most 55gr FMJ. The good news is groups with heavier bullet loads like Black Hills 60g V-Max (a ballistic tip bullet), Federal 69g Match and Hornady 60g TAP are well below an inch. The Federal 69g BTHP averages .66. So, even though I’m not pleased with how the upper shoots most 55gr FMJ, I really can’t complain about sub 3/4 MOA accuracy with the right loads.

Another item I wanted to try out was Magpul's Angled Fore Grip. I have never been able to warm up to vertical grips (VGs). Magpul’s AFG bolts-on to any railed fore-end and places your hands at about a 30 degree angle. This approximates using a standard vertical grip as more of a hand-stop then a hand-hold. (The current trend for using VG’s). I haven’t formed a solid opinion yet but so far, I like it.

I really like the VTAC free float tube. It’s very light weight and because it doesn’t have sharp Picatinny rails on all four sides, you don’t need to spend $50 on plastic rail covers. It comes with three sections of bolt-on rail for lights and other accessories. I don’t like large hand guards. One of the reasons I went with this tube is it’s small diameter. However, it does not provide any insulation from the heat generated by the barrel and gas tube and it does heat up quickly. If you're shooting a lot of rounds quickly, it does become uncomfortably hot. Using an AFG or standard vertical grip solves the problem.

In summary, I’m pleased with the gun and the accessories I’ve added. There have been no reliability issues. I find the 1.5-6x very useful as an all-around optic, although for home defense/CQB applications a standard red dot is faster and easier to shoot from unorthodox positions due to it’s unlimited eye relief. A side note on the Hornady Training Ammo: This is a steel-cased load that is supposed to duplicate the ballistics of their TAP round for economical training. This ammo gets some very good reviews, for steel-cased ammo. We used about seven cases of this stuff for training and qualification, last October, at work. Out of every case, we had two to four dud primers. We were not impressed with it. It didn’t seem very accurate, although we didn’t do any real bench testing. I only bought some of it because it was real cheap ($.29 a round) to use just for CQB practice.  Shooting groups with it was just so I could see how close the POI was to the other ammo. When my first group was under 1.25, I really started to focus and ended up with four, three-shot groups at .99". Outstanding for FMJ’s. Point of impact was consistent with other loads. This just goes to show that rifles can be very individualistic when it comes to the ammo that they will shoot well.