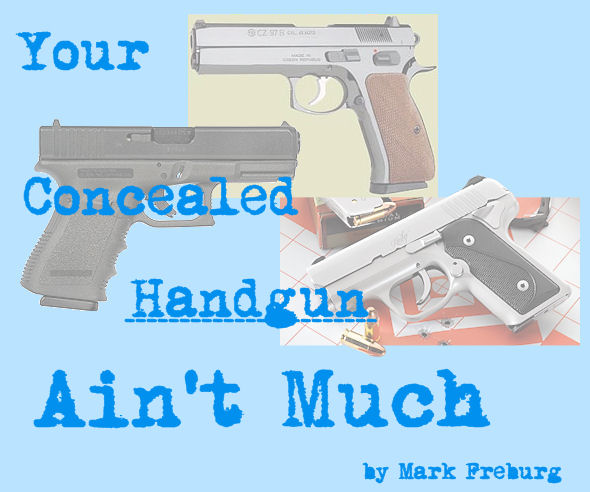 Why this title?  Because if you think just having a gun is all you need and you are good to go, think again.  Mark Moritz is often quoted that the first rule of a gunfight is "have a gun."  People  forget that this is the first rule, not the only rule.

Realistically speaking, the handgun at your side is not the best tool to get you out of, as a friend put it, "whatever situation you might be stuck in," and in fact could very well prove to be incapable of doing so.  Assuming that it will is not a good idea.

I've been studying this topic for three decades and have taken professional training to include a big city police academy and military police training.  Doesn't make me an expert!  Just shows I'm interested and not completely without any experience.  Others have been around much more and may have better ideas, so listen to them.  I'd like to think I've condensed many of these ideas here, however.  What I've put together should start you on the right path, and perhaps burst a few bubbles if you've already started and have some ideas you've developed from other sources.

These things that will increase your odds of survival:

A) Assume a proper mindset.  By that I mean be prepared for violence, even when none is expected and it actually seems most unlikely.  Be alert and aware at all times.  Don't look like a victim.  Act tactically--don't move into tight quarters in public places--small lanes between cars in a parking lot for example.  Leave lots of space around you to move away, or, if necessary, fight.  Look ahead.  Very good drivers are trained to always look a block ahead and thus are rarely surprised by "sudden" traffic problems.  In the same way trained armed citizens should always look beyond the usual couple of yards most of us look and be aware of surroundings far more distant, plus we need to look around in all directions and not focus strictly ahead.

If we are ever attacked we need to fight for our life because that is what is at stake.  Be ruthless, fight like you've never fought before, give no quarter, no mercy, because this is not a civilized fight.  Even if you are hurt and hurt badly, keep fighting!  Fight until your attacker can no longer harm you.  An excellent book on this topic is Principles of Personal Defense by Jeff Cooper.  It is not about guns, it is about mindset.

B) Get training in weapons and tactics.  Fortunately and unfortunately there are more schools and instructors out there than ever before.  I say that because the best known ones are expensive but well worth your money.  The not-so-good ones may be expensive or inexpensive but may not be worth your money.  Then there are some schools known only locally that are like finding a pearl in an oyster.  How to tell the differences?  You must do a lot of research, there is no way around it.  Ask around at shooting clubs, gun shops, and do research on the web.  If you can afford it attend more than one training venue as instructors as a rule are an egotistic bunch and often will tell you their way is the only way.  This is emphatically not true, and if you attend more than one school you will find there are multiple ways to do things.  Then you can choose the ways that fit your body and athleticism and preference best.

But understand having a gun does not make you a shooter anymore than owning a Ferrari makes you ready to race in the Lemans or owning a violin makes you ready to perform in the symphony.  You must get that basic training on its use, and after you get training you must practice on a regular basis.  In addition to training, augment your knowledge base by reading books such as In the Gravest Extreme, Concealed Carry, and Combat Handgunnery.  These all happen to by Massad Ayoob, an expert in the field, but others abound.

C) Carry a weapon that stacks the odds in your favor.  Handgun wounds in general are usually survivable.  If you really want to "stop" your attacker you need to carry a shotgun or a centerfire rifle.  As this is not practical and in many states not even legal under your concealed carry license, we carry handguns.  Believing that a handgun will always result in a "one-shot stop" is ridiculous, an idea unfortunately brought about partly by Hollywood and partly as an unintended side-effect by the otherwise useful research into real life shootings reported by Evan Marshall and Edwin Sanow in their series of books on "stopping power."

So if you are wise you will accept the fact that handguns are underpowered as firearms go, and exist primarily because they are convenient.  If all handguns are wimpy compared to a rifle or shotgun, why would you choose from the bottom power level in the handgun realm?  If the "hassle" of carrying a gun is more of a bother to you than being prepared should you or your family  ever be violently attacked, stop reading this and turn in your carry license as you're just playing at this concealed carry thing and not willing to take it seriously.  For the rest of you, this is no place to carry a small caliber gun, a snubnose barrel that robs velocity from your cartridge, or a very small gun that is hard to shoot.  In a real-life attack you are going to be scared and your skills are going to diminish, so a difficult-to-shoot handgun is a poor choice under those circumstances.

You'll note that at your training classes everyone was shooting a gun that was either full-size or compact, and, occasionally, a subcompact.  But no one shoots mini-guns at training schools.  Why?  Because they are impractical--hard to aim, hard to hit with.  If mini-guns don't work at shooting schools, how can we think they will possibly work to repel a violent attack?!  We must understand that carrying a gun means a lifestyle change.  You must change your wardrobe a bit to fit the gun.  Don't be dumb and try to fit a gun into your wardrobe because that usually means tiny pocket pistols that are only effective in near contact shooting into openings in the skull, and those comprise a minuscule percentage of all defense shootings-not something you can count on being presented.

Carry guns should be: 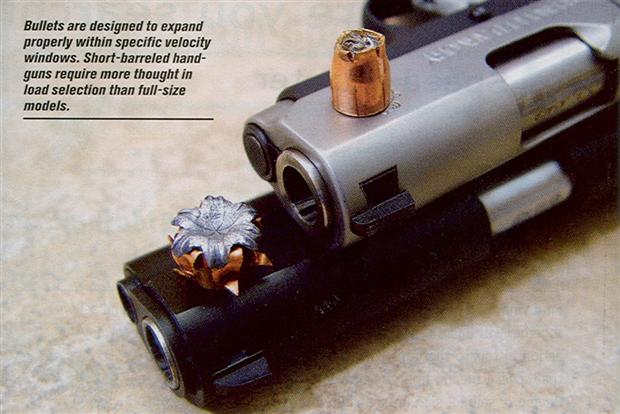 I believe it you take these things to heart you will be prepared to defend yourself.  You will understand that a handgun is not a magic wand, you are not Superman, and bad guys can win.  But if you prepare yourself, you can win and the bad guys can lose.  Be the winner. 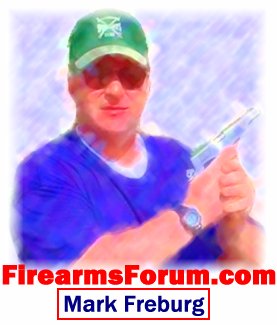