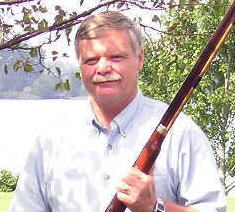 An Editorial by Dale Mullin

If you’ve been paying attention to the news, you probably already know that we firearms owners are being demonized. We’ve become the subjects of cheap jokes and political cartoons, not to mention diatribes by celebrities. While it is no longer socially acceptable to defame any other group based on its culture or beliefs, gun owners are ridiculed without a word of protest from the “thought police”.

How did firearms owners come to be such pariahs of society? I suppose a good many factors are involved, but I think one of our problems is that many responsible gun owners have been literally hiding their interests in the closet. The nightly news, movies, and newspapers are filled with numerous examples of the misuse of firearms. Many of us who use firearms responsibly have quietly enjoyed our sport, trying to remain unobtrusive, so as not to arouse the fears of those who do not share our enjoyment of firearms. As a result those around us have not had many opportunities to see that gun owners/enthusiasts are, for the most part, normal, responsible people.

The voting public is a diverse group. While some have bought the media sound bites, hook line and sinker, many more have not firmly made up their mind. You and I will have a very hard time swaying the opinion of those who’s minds are “made up,” but there are vastly more people who haven’t formed a firm opinion. We as neighbors, co-workers, fellow parents, fellow PTA members, fellow church members, etc., have a certain, built in, credibility with those we know well. It is up to us to become “Firearms Ambassadors,” to take advantage of these personal relationships to help inform those who are unfamiliar with firearms and who’s minds haven’t been “made up.”

I believe that at least one caution is in order when “informing” others of our involvement with firearms. There is an old saying that, “You never get a second chance to make a good first impression.” Try to imagine yourself as a person who is not anti-gun, but knows little of firearms, other than what has been depicted in the popular media. You see a person wearing camouflage pants and a T-shirt. The T-shirt bears a depiction of a man with an “assault rifle,” and the words, “Why run, you’ll only die tired!” While many of us who’ve been around firearms all of our lives can appreciate the dichotomy of such a message being displayed by a “responsible” firearms enthusiast, the non-gun owner is likely to have a very different viewpoint. I think you’ll agree with me that we gun owners should NOT dress so as to appear to be poster boys for a Handgun Control Inc. recruiting ad. Before you venture out in public, consider the message that your appearance is sending to the uninformed.

Now, on to the work of spreading the good word. If the opportunity presents itself, offer to take a neighbor or co-worker to the range. Make sure it is a pleasant experience. If you don't own a .22RF, make arrangements to borrow one. If you can’t actually take someone to the range, at least discuss your firearms hobby with people you know. Allow them to learn how much care you take to ensure safety. Tell them how you’ve used the firearms sports to teach your kids responsibility. We've got to overcome the misinformation, and with our current media, changing one mind at a time is about the only means we've got. If responsible gun owners don't get the word out to the population, who will?

If we can begin to put a recognizable face on NRA members/gun owners as responsible people, who are valued members of our society, we may begin to slowly cut through the propaganda, which paints all of us with the same brush. We must behave responsibly, so as not to cause alarm among non-gun owners, but to hide our involvement with firearms is to allow the other side to control the image of gun owners. Be a Firearms Ambassador and help spread our message far and wide.

Copyright 2012 by the author and firearmsforum.com, all rights reserved.