I decided to jump into the AR-15 Pistol game for a few different reasons. For one, I like odd firearms. At the shop*, my employees will inevitably point to me when someone has a question about an obscure firearm, or wants to get some kind of “strange” (i.e. obsolete, or Commie based) ammunition. For another, the sales staff inadvertently started getting into a “build contest” seeing who could create the coolest AR-15 pistol (the current contest has me and another employee tied for the strangest build). Then I got to questioning why the AR-15 pistol is experiencing a bit of a boom. So, I decided to try and answer my own questions with my build and I jumped into the deep-end. What I found was pretty cool.

The Build, Lower and Upper

I wasn’t sure where to start, except that I needed an AR-15 lower (transferred to me as a Receiver on the 4473, this way it can be re-built into a rifle if necessary) and a lower parts kit. Everything else was learned “on the go” with encouragement from my staff. What I learned is listed below with the components I used for the lower:

AR-15 lower, Seekins Precision. Any AR-15 lower will do. Just ensure that it is transferred to you as a receiver (this is a standard option on the Federal Form 4473 and allows for conversion to a rifle if necessary. The reverse, rifle to pistol cannot be done per ATF regulations.

Lower parts kit. Any AR-15 lower parts kit will work here. I used a DPMS kit that has the mil-spec trigger as part of it and the standard A-2 style grip. The trigger and the grip can be easily swapped out for custom parts later on.

Magpul Ambidextrous Sling Attachment Point (ASAP). I recommend this for the inclusion of a single point sling (also from Magpul). This is useful for carrying/developing a sight picture. More on that technique later. This can be found here: Click Here

Now that I had the AR-15 lower complete, I decided to search for the upper. After 5 days of looking (this was when AR-15 components were unobtanium shortly after Sandy Hook) I found a generic one on Gunbroker.com that was chambered in 5.56 NATO with a 7.5 inch barrel with a low profile gas block and no sights. One question that has come up is: Why so short of a barrel? Remember I jumped into this headfirst in the deep end. I didn’t research barrel lengths and issues with them. At the time, I figured if I was going to go pistol, I’d get the shortest barrel length I could find and that happened to be 7.5 inches. I have since learned that some users have issues with their pistols cycling correctly with barrels under 10.5 inches. While I haven’t had any issues with my 7.5 inch barreled upper, it’s something that has come up enough in my research to mention here.

Quad Rail. If you are going to do the AR-15 Pistol, the quad rail is essential to attach a flashlight, laser, or hand stop. Mine came with one and a bunch of rail panels to close up the empty real estate. I heavily recommend it. It also provides better protection from a hot barrel as the open portions of the rail allow the heat to vent.

Magpul Hand Stop. I heavily recommend this on an AR-15 pistol. Since vertical foregrips are illegal (they are then considered an “Any Other Weapon” by the ATF and subject to a tax stamp) and angled foregrip legality is questionable (the letter floating around the Interwebs is directed to one person and seems too generic to trust), the hand stop is the logical choice and it works well. It serves as a lightweight, low-profile rail mounted index point for improved, or as a forward stop to prevent the shooter's hand from reaching the hot front sight assembly or muzzle. I found the second advantage of the hand stop to be more important.

Red-Dot sight. Using typical AR-15 sights on an AR-15 pistol is somewhat difficult and annoying (at least I found it so). I decided to use a Red-Dot sight and after a bit of horse swapping, I ended up with a Burris Fast Fire. It works, but nowhere near as well as an Aimpoint Pro. However, considering my Aimpoint Pro is on my AR-15 rifle, I decided to stick the Burris on the Pistol Upper. It works great.  (If the Burris works great the Aimpoint must be, what, mind-bogglingly stupendous? --ed.)

Muzzle Brake. I swapped out the A-2 style flash-hider for a Troy Industries Medieval flash suppressor. We had gotten some good feedback on them and knowing a bit about the muzzle flash of an AR-15 pistol, I decided to get one. Click Here

These are all the things I have done with my 5.56 Chambered AR-15 pistol. They are simple, yet really improve on the concept and execution of the pistol.

I picked up the pistol, ensured that the chamber was clear (while pointing downrange), inserted a 30 round magazine with 2 rounds in it, put the buffer tube on my cheek to acquire a sight picture, and put my left hand on the quad rail using the hand stop as a guide and pressed the gritty mil-spec trigger. At first, I was shocked at the report and the muzzle blast from this thing. Then it hit me, there was hardly ANY felt recoil. Granted, the fireball lit the range up and I could see the close-in targets move from the muzzle blast. Then, “The Grin” hit. We all know what this is, it’s that massive tooth showing goofy expression that comes out when we realize that we should have done something like this a LONG time ago. I had it and I had it bad.

I fired the pistol again, this time ready for the report and the fireball. I then put another magazine in and got to work zeroing the Red Dot sight. I found the pistol very easy to shoot and very easy to get nice tight groups at 50 yards (hey, the NRA range is only 50 yards) and I found that it was far easier to get tight groups with this pistol than the other pistols I own. I think it’s because I have 3 “touch” points where my body is touching the pistol (cheek, right hand on grip and left hand on quad rail using a hand stop) and the sighting system emulates that of a rifle. In short, it’s a fun thing to fire. Once my friend who was with me fired it, I could instantly see that it was better to be behind the gun than to be on the sides of it. Our observations were that the noise and gas coming from the flash-hider make it annoying for the person in the lane next to the shooter.

Reasons for an AR-15 pistol

So, now that I had a complete pistol, I began to search for a justification in owning it. What was I going to do with it? Why does this concept fascinate so many people who like their AR-15s? Here’s what I found with my own observations (disclaimer, I am not an attorney, nor do I pretend to be. It is recommended that one check with their own state and local laws regarding firearm legality):

Some states don’t allow a Short-Barreled Rifle (SBR). The AR-15 pistol is the closest thing that a citizen will be legally be able to own in those states.

Some states don’t allow the carrying of a loaded rifle in a vehicle. Since the AR-15 pistol is a handgun, it can be legally carried in a vehicle in those states that allow it.

It’s compactness allows for ease of maneuverability, especially in a vehicle, or tight space.

It’s a pistol with diminished rifle power yet it has high capacity (compared to most handguns), low recoil , and the round itself will not overpenetrate in an urban setting.

It is an accurate, high capacity pistol that offers many of the advantages that a Personal Defense Weapon (PDW) offers.

They look really cool, and Willem Dafoe used one in "Clear and Present Danger”.

It comes with a Picatinny rail receiver with a 12-inch barrel and carbine-length handguard.  The muzzle brake is their "Tank Brake".  I have only shot 10 rounds through the .50 Beowulf upper. Recoil is stout, but not undoable.  I am in the process of doing a Short Barreled Rifle and These are the 2 Uppers I am going to use for it. I'll just switch the pistol lower over to the SBR when my paperwork comes in. 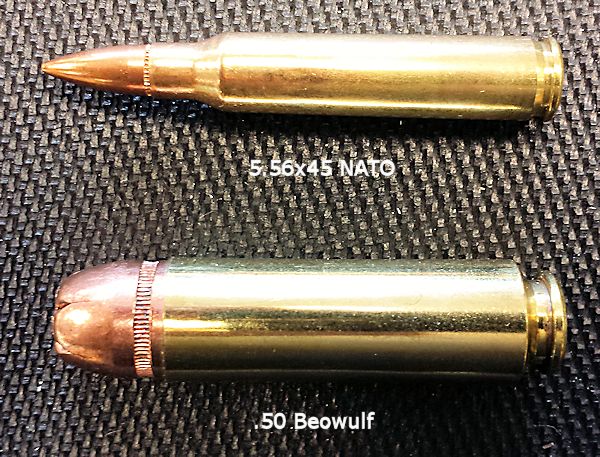 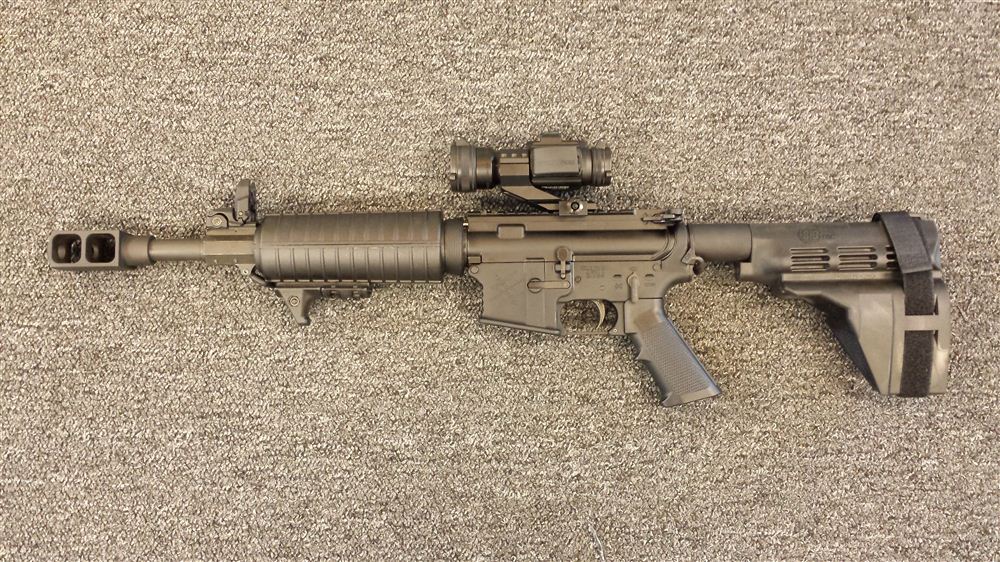 Components are: Seekins Precision AR-15 Receiver, DPMS Lower Parts Kit, Alexander Arms .50 Beowulf Upper (with Tank Brake), KAK SB-15 Buffer Tube, Sig Brace, Vortex Strikefire Optic, Magpul BUS front sight (just a placeholder, this will be replaced), and a partial Magpul handstop on the bottom (need more Picatinney rail sections there). I have no plans for a light. I MIGHT have plans for a rail. Depends on what it costs to get a good free-float rail that can be installed on a 50 caliber barrel. When I started this build-out, the environment was all AR-15 Hot and Heavy, the 300BLK round was just hitting its stride and there was a pressure build within the shop to build the most "tactical" pistol. The winner at one point was a 300BLK pistol with the Surefire 60 round magazines that one of my employees built. It also had "wings" on the buffer tube that allowed a prominent place to put a cheek-weld. I thought i'd have to stock a ton of those in the store. That was before the advent of the Sig Arm Brace. If you look closely, it resembles a stock, and the ATF recently ruled that it was OK to place the brace on the shoulder and clarifying it would NOT be subject to the NFA. Open Floodgates. Now, you have what may as well be a Short Barreled Rifle that's completely legal. Well, since that April Letter, it's been impossible to get the SIG Braces from distributors, so i finally broke down and ordered it from Amazon, along with a specific buffer tube that allows for the installation of the brace (but still not allow stocks, I'm trying to be careful here).

For those that aren't familiar with the .50 Beowulf, it's the largest caliber that will fit in a standard AR-15 action. From the Alexander Arms FAQ: "The .50 Beowulf is the original big bore caliber for the AR style rifle. Its parentage is from the 50AE, which IMI introduced for the Desert Eagle pistol, but, as is obvious from its external appearance, this is a somewhat removed relation. From the ground up, the .50 Beowulf® is simply the biggest cartridge that can be fed reliably through an AR style mechanism without massive internal changes. The case length is set to allow the use of near standard magazines without having to use filler blocks and the volume allows the cartridge to work at very modest pressures, which is essential for such a large cartridge to be safe in the AR chassis."

Ballistics for the .50 Beowulf out of a 12 inch barrel are here

Here is a picture of the sizes of the cartridges: 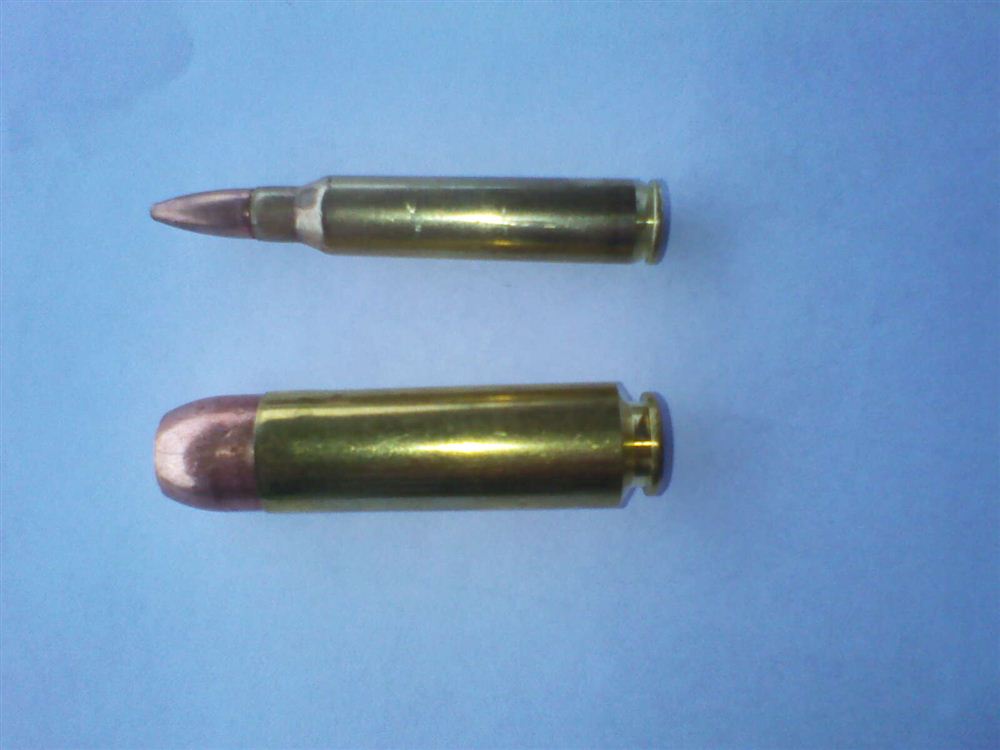 Just wanted to see what the brain trust of the forum thought about this build. I have no idea what it could be useful for. A customer suggested a laser be placed on it and then that way this gun would make a dandy pig-hunting firearm. Good brush busting, hog-anchoring cartridge.

*TJ is the owner of Nova Armament of Herndon, Virginia.

Copyright 2013 by the author and FirearmsForum.com, all rights reserved.