I have talked about this off and on for the last few years. I’ve decided that it’s time to share some feelings and some thoughts about how to “get back” to the way things were before. I’m talking about the Washington Navy Yard mass murders on Sep. 26, 2013.

I worked in Building (Bld) 176, which is across the street from Bld 197, where the murders took place. At the time, it was a chaotic scene: there were reports of multiple shooters across the Washington Navy Yard, some at Bolling Air Force Base across the Potomac River, and a general scene of all around chaos. We were told by authorities to hunker down and stay in place. I was fortunate that I was in what is referred to as a SCIF (Secure, Classified Information Facility). This meant solid doors that could be physically locked and no windows, which is what we did while information was being sorted out. We were later allowed out of the SCIFs to wander the building but not to leave the premises. So, I took advantage and plied my caffeine addiction to get some sodas from the vending machines down the hall. Fortunately, I had enough small bills to get a few for the co-workers. While choosing my fourth Diet Coke, I saw the small spindly form of the number two person in my department struggling with what looked like 3-4 stretchers among what looked like fire blankets. Handing all but one of the sodas to my co-workers, I went and grabbed the stretchers from her. These “stretchers” are more like wheeled chairs with straps. They’re meant to assist handicapped folks get down stairwells with reasonable speed. Hey, it’s what they had at the time.

Apparently, a call had gone out to leadership to gather stretchers and fire blankets from all buildings and to bring them all to the parking garage which was on the same side of the street as Bld 176 and across the street from Bld 197. When I got there with her, I was stunned. The entire first floor where there weren’t cars was stacked deep with real stretchers, EMT personnel and at least two Navy “helpers”. It was obvious this was going to be a trauma station prior to being shuttled off to the hospital and it was expected to be bad. I counted 21 such teams. We were told where to corral the stretchers, where to put the blankets and then told to get back to Bld 176. We complied. I got a look at the front of Bld 197. There were not only active duty Navy MPs, but I also swear I saw US Marines as well (the USMC Barracks at 8th and I are where they came from I later found out), and US Capitol Police (I have a High School friend on them who was feeding me limited Situational Awareness intel like the fact it was just the one gunman). There was a running gun battle throughout Bld 197 that day and the troops outside were meant to stop any and all comers from exiting. I knew that Bld 176 was now safe. Once back inside Bld 176, I relayed the situation and that visibly calmed some fairly upset people and I felt a bit better.

I later found that two friends of mine among the 12 victims had been murdered. These were folks I had worked with for years. Their names are in the memorial in Bld 197 and I stop by every once in a while just say a quiet hello. My client (employer) was a wreck all day. His wife worked in Bld 197 and had seen the murderer running through the halls. His kids were in daycare on Bolling Air Force Base which was under lockdown as well, with reports of active shooters. I was at least able to confirm that the active shooter was limited to Bld 197. That intel was courtesy of my high school friend on the US Capitol Police. We were finally released from lockdown around 4 PM. There were FBI agents outside taking down names and phone numbers. My client had a problem. His car was caught in the evidence quarantine of the parking garage. His wife was still in Bld 197 as the FBI was all over the place, and his kids were over at Bolling Air Force Base. I gave him the keys to my car and told him I’m good. I’ll take the subway home. The beer I had that night at the outside restaurant never tasted so sweet. It was then I decided to make it up to the OGCA show (gun show in Ohio) and “get away” from DC for a few days. One of the best decisions I ever made.

When I was trapped at the WNY during that active shooter scenario, it was probably the most helpless I'd ever felt. Doing those things like soda gathering and assisting with material gathering helped quite a bit as I was “doing something”. I somehow turned this into planning for the “the next” event, considering that these shootings happen in “gun free” zones. So, I thought what could help me? I decided on a “kit” that could be employed during a shooting event, and some additional stuff that could help for an extended time. I also needed it to be “Navy Yard” friendly (i.e. nothing lethal):

• 1-2 days worth of personal medication "just in case".
• Change of clothes, just a change of socks, underwear, Short Sleeve T-Shirt, and pair of casual pants.
• First Aid Kit with Tourniquet and blood clotter
• Door Stops to use on doors that open inward but have no locks. Cheap and very effective to use in "barricade" situations.
• 2-3 bottles of water (20 oz) and 2-3 different protein bars. This helps when you haven’t had lunch and have low blood sugar issues like I do.
• Sharpie marker in case I needed to write on any particular surface.
• Standard lockback knife for utility cutting needs. Anything more than this is considered a weapon on a federal base and therefore illegal.
• $10 in quarters (for vending machines).

• Quality medical training for gunshot wounds.
• Tactical Flashlight with common batteries (AA, AAA, etc).
• Duct Tape. I found that this would have been useful for probably half a dozen things, like anchoring the door wedges in place, etc.
• Cell phone charger. This should have been obvious.
• Metro card with about $20 in fares on it. This is in case your car is impounded.

I found that putting this kit together helped me a lot afterward. I also heavily recommend having a counselor of sorts that you are friendly with. I was seeing one during my divorce and I am grateful for that relationship. The Navy, God Bless them, had chaplains and counselors available afterward, but because I had the pre-existing relationship, I was able to get in almost right away to see her after I saw the news one night. This incident happened because I saw a video of the murderer running up and down stairwells that I had been in hundreds of times. I got a bit of an adrenal response; quickened heart rate, sweating, and a red haze of anger. I called the news station and let the station manager have it. How they were inconsiderate, looking to make the murderer a martyred celebrity, and a few other choice insults about their parentage and breeding with certain single celled organisms. Turns out the Navy got on them about it too since the investigation was still underway.

So, after seeing my counselor, she stated that I had experienced a minor form of PTSD. That surprised me a bit. She asked how I was handling it. I told her the phone call to the station helped a bit, but that I had put together a “kit”. She was impressed, and I found that putting it together afterward was one of the smarter things I could have done. It helped me compartmentalize the whole thing and “put it away”. That kit sits with me at my desk offsite and I refresh it from time to time with new protein bars, bottles of water and first aid kit as that stuff occasionally expires. The kit was part of my way of "fighting back" and healing.

When I got back from the OGCA meeting, I went back to Bld 176 for the first time in about a week. I found an FBI agent in our spaces looking at our log book saying “Yup he was here". I asked “Who?, the murderer”? He replied yes. They were looking for the person that escorted him and after mangling my last name, I said with the color draining from my face, “That’s me”.

Turns out, I escorted this piece of excrement in our spaces about a month before. He was there doing an “inventory” of govt. assets.

We had talked about different IT careers and what he wanted to do next. I vaguely remember encouraging him to get an advanced degree in Information Technology on the management side if he wanted to advance and get more money. That conversation and escort was about 30–45 minutes. The FBI agent suggested that this murderer was “casing” the different buildings looking for suitable targets that were easy to access. Since our building is nothing but SCIFs that require different escorts, he obviously looked for easier opportunities. 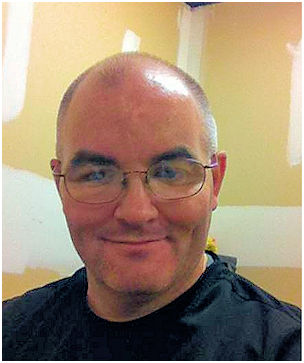