Let's take a quick look at the Mosin-Nagant bolt action rifles used by Finland. The Finns took advantage of the Russian revolution of 1917 to kick the Russians out of Finland that December. At the same time they decided to adopt as their own all the Mosin-Nagant rifles and ammunition they captured, armories full. Over the years the Finns had several models. All were based on captured receivers. Although the Finns rebarreled, restocked, and changed out all small parts, the original receivers were Russian or from Russian sources, and no Finnish-made receivers are known.

The Finns started using the Imperial Russian M91s. The Russians had changed from sights regulated in archaic arshins (about 30 inches) to sights regulated in meters, which were already in place when the Finns adopted the Mosin-Nagant. The Russians had to change the sight style as well because like most countries, Russia went from a high trajectory round nose bullet to a flatter shooting spitzer in 1908. The one major change that the Soviets made to the M91 was to shorten the rifle and change sights again to a post front and tangent rear to replace the blade front and leaf rear. This model was the 91/30, and was the most used Russian rifle of WWII. While the M38 and the M44 were shortened M91/30s, they were in other respects the same rifle.

The Finns originally adopted the Russian M91 as is, but then they also started rebuilding and changing barrels. These were redesignated M91/24. This was the first uniquely Finnish model. These rifles were issued to the Civil Guard. Keep in mind that the Civil Guard, the internal Finnish security force, was separate from the Finnish Army. They were both full-time military organizations and their rivalry was fierce. For a time the Army and the Civil Guard both used M91s. Bore diameters of Finnish-barreled rifles were nominally .3095", smaller than Russian barrels, which were .310", .311", sometimes as much as .314".

The first big change was the Finnish Army's Model 27 rifle. This had a shorter 27" heavy barrel. Front sights were protected, sling swivels were used instead of the sling slots standard with M91s, and the trigger improved. The stock furniture was improved as well.

The Civil Guard adopted the Model 28 shortly afterward. This improved stock furniture even more, and the rear sight was drastically improved. The barrel was heavy like the Model 27, and shorter than the 91. Sling slots were used.

The Civil Guard then adopted the M28/30, which improved the rear sight further, introduced the screw adjustable-for-windage front sight, and added an even heavier barrel. The bore diameter was reduced to .3082" nominal.

The final Finnish rifle model was the Model 39 (pictured at top), and was adopted together by both the Civil Guard and the army.  The M39 had a slightly shorter fore end than the earlier models, and used a thinner barrel.  This was the only stock used with a pronounced pistol grip as well. The two-piece stock came about with the model 39, carefully finger-jointed together in the middle for better protection against warping of the arctic beech wood used for stocks. Because the Finns constantly retrofitted existing older model rifles to current standards, it is common to see all models of Finnish Mosin-Nagants with two-piece stocks, as well as many upgraded features like stock furniture, sights, etc.  Model 39 bore diameter returned to the larger 309.5", often reported as .310".  This was reportedly done in order to work better with captured Russian ammunition, of which the Finns had huge amounts.

In 1944 the Civil Guard was disbanded and the army took over both internal and border defense. Thus all Finnish rifles came to be marked with a "SA" in a square, an abbreviation for Soumen Armeija, roughly translated "property of the Finnish Army." That explains why even Civil Guard-marked rifles are also found with the SA stamp. From 1939-1945 Finland rebuilt many standard M91s and M91/30s as they captured many more from the Russians, so these are also seen with 1940s barrel dates.

Although Finland adopted the Kalashnikov-style rifle much before this, they were still building Model 39 rifles as late as 1969 and 1970 from left over parts. Finnish rifles were not released from stores until the 1980s, some not until the 1990s.

I've only barely touched on the history available on these rifles, and I skipped over the carbine variations, the slings, the bayonets, and all the other interesting accouterments that make collecting and shooting "milsurps" such a fun and fascinating hobby. Nevertheless, I hope you've had your appetite whetted somewhat, and that you'll at least look over the next Finnish Mosin-Nagant you see at your gun shop or local gun show.

One thing the prospective shooter should know even if it matters less to the collector. Finnish Mosin-Nagants will shoot with any rifle of their era. That includes some of the most accurate rifles of the day: Swedish Mausers, U.S. Springfield M1903s, Swiss K31s, and so forth. For every collector who looked at a Russian Mosin-Nagant and turned up his nose, the Finnish rifles are as different as night and day, both in quality, and in shootability. 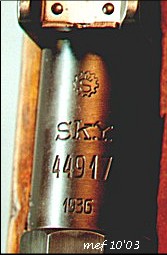 Pictured to the right is the detail on a Finnish Model 28/30. The S within a gear is the mark for SAKO, who built the barrel. S.K.Y. is the mark for the Civil Guard, who adopted the M28/30. The serial number is next. All Mosin-Nagants are unusual in that the serial number is found on the barrel, not on the receiver. 1936 is the year this rifle was built. Note below the date is the polygonally-shaped receiver. Although the Finns rebuilt some round receivered M91/30s, which were strictly Soviet manufacture, the vast majority of Finnish rifles used these older polygonal receivers.

Your comments or questions are invited. My friend, the late Mike Davies, originally gave me the idea to jot down a few thoughts on this subject.

Update 2020: Collectors today are more savvy than they were more than fifteen years ago when I wrote this article.  All rifles but the Model 39 and the odd captured Soviet rifle with nothing but an SA property mark have essentially disappeared from the everyday (read affordable) milsurp collector's market, and other Finnish rifles have truly entered the more rarified pricing zone of quite serious collectibles.  Still, keep your eyes open, you never know what you'll find.