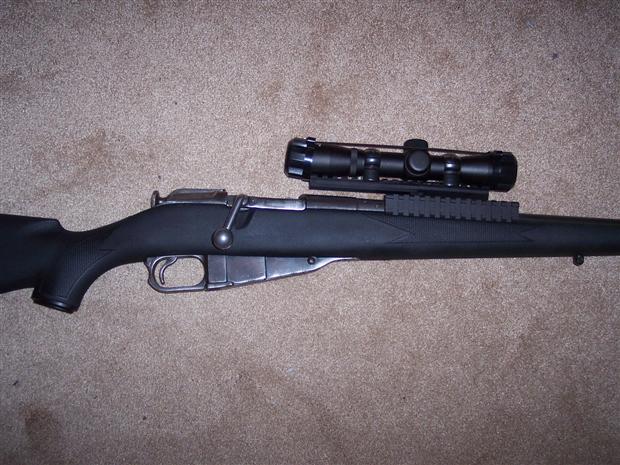 Description: Description: This is made from a 35 dollar T-53 Chinese Mosin Nagant. When I mailed my C&R off for this on a "why not" whim, I got back a workable rifle, but a stock that was literally disintegrating every time I handled it and a bore that might have been used as a main sewer line somewhere.  So, I decided that I had a "project" gun and that there was no inherent collector value in it. Off I went.
The stock became firewood. It was unuseable and was literallly rotting in all the wrong places so I replaced it with an ATI stock. I was lucky that the T-53 popped in with no modifications.
I then popped out the rear sight spring and range indicator,replacing it with a  Picatinney rail setup. I then added a fixed power NC-Star 2.5X handgun scope, and swapped out the bolt handle with a bent variant. Getting the bore done was the most challenging. I couldn't see down the bore at all. So, I took a rifle cleaning rod and a mallet and literally hammered it down the bore to get the beginnings of the crap out of there. Bozhemoi!!! Once I got the majority of the crud out I could see light out the end of the barrel. Thinking I paid too much for this rifle, I took some sweets 7.62 copper fouling remover, then plugging the barrel at the crown, I poured it in and waited 30 minutes. The results were STAGGERING. It helped jar loose all the crap and I could see lands and grooves. Then using the same (now slightly bent) cleaning rod, I pushed patches until the solvent was out and then poured Hot Water down the barrel. More crap gone. I then took a steel "hurricane" brush and got the rest of the crap out. No bright shiny bore, but no pitting either. Just solid lands and grooves. Yea!!!! I then checked headspace (good), and then took it to the range. It fired, I had NO idea where the rounds went. 19 rounds later, I had it zeroed. The gun shoots surprisingly well out to 100 yards. Granted, it took me a box of ammo to get it zeroed, but it does work. Uploaded: 4/8/2009 by TJ Parmele