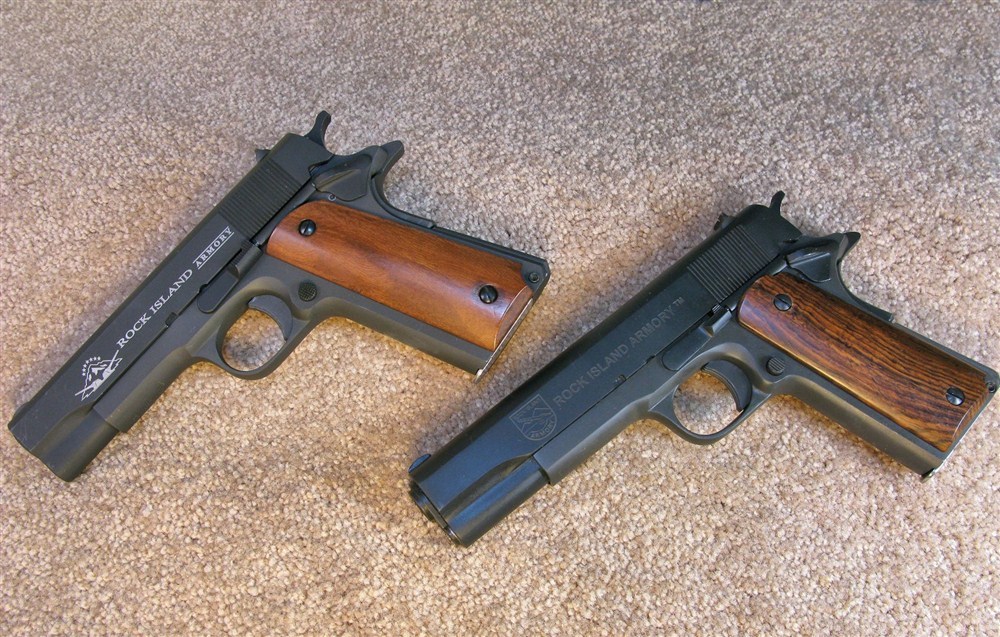 Description: Two essentially GI-spec M1911A1 pistols from Rock Island Armory.  Both are pistols I considered trading off recently, although both work fine.  The Commander-length pistol on the left, with the over-the-top logo--the second used by the company--has a bushingless bull barrel and a full-length guide rod.  I don't like the looks of the lack of a bushing, which admittedly is a silly reason to dislike a pistol.  But more than that, I'm not a huge fan of 4.25" 1911s, and if I'm only going to have one, I'd rather have a classic looking one like and older Colt or the current Remington R1.  Since this shoots fines I'm sure it would suit someone else better than I. The Government-length pistol on the right is a 9mm and has the original logo, which was lower key but still spread out.  (RIA's third and final logo is much tinier and sits behind the rear serrations only.)  I also considered trading this pistol because the sights are hard to see, but I'm having second thoughts as it's only a range pistol, not a carry gun, and I'd probably not switch my .45 for a 9mm.  I have a target 9mm and a smaller carry-type 9mm, so my need for a full-size carry 9mm is pretty slight.

Camera/Image Info
Camera Make - CanonCamera Model - Canon PowerShot G9F-Stop - F/4Shutter Speed - 1/20 secFocal Length - 7.4 mmISO-100
Comments on this Image: (Be first to comment.) You must be registered user and logged in to comment.
Login or Register and you will be returned to this image page.