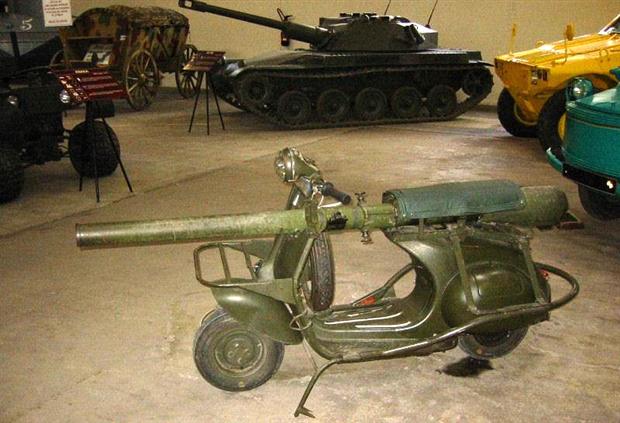 Description: After World War II, there was little money for defense spending while the nations of Europe rebuilt their industry and society. When there was some cash to spend, one had to be creative to stretch it as far as possible. The French probably accomplished the most astounding example of that with the ACMA Troupes Aeról Portées Mle. 56. Deployed with their airborne forces, this was essentially a militarized Vespa scooter outfitted with a 75mm recoilless rifle. Five parachutes would carry the two-man gun crew, weapon, ammunition, and two scooters safely to earth, and the men would load the weapon on one scooter and the ammo on the other, then ride away. More impressively, the recoilless rifle could be fired effectively on the move by the best of the gun crews. Total cost? About $500 for the scooter and the recoilless rifle was war surplus. Were they successful military machines? Well, the French Army deployed about 800 armed scooters in wars conducted in both Algeria and Indochina.

See what is being said about this image in the messages area.
Comments on this Image: You must be registered user and logged in to comment.
Login or Register and you will be returned to this image page.