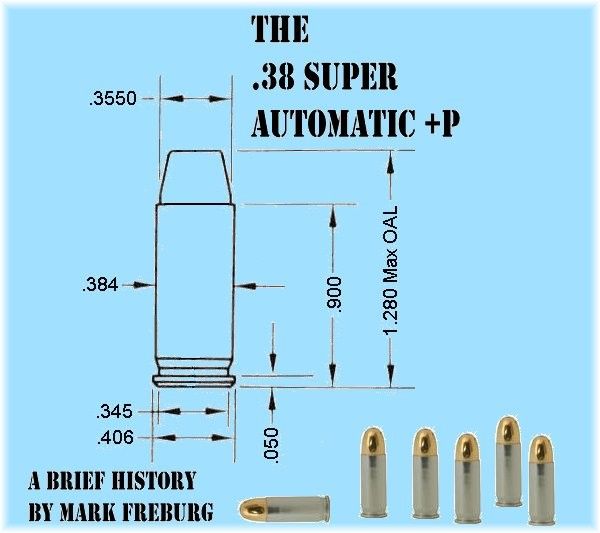 I recently had the following question asked of me:

"Why hasn't the .38 Super taken off as a Self Defense round? I read through some ballistics charts and the .38 Super's stats are impressive. "

Interesting question. Actually the .38 Super attained a fair amount of popularity after it was announced in 1929.  But let's look at where this round came from first.

The .38 Automatic or .38ACP had been around since about 1905, intended for Colt's Model 1900 (right). The .38ACP was similar to the 9mm Luger in power, or slightly less powerful.  The Model 1900 however was not a particularly strong pistol, nor were the models that followed like the Model 1903 Pocket Hammer (below right), and so Colt created the "Colt Super Automatic," which

was nothing more than a .38ACP loaded hotter--yes, simply a ".38ACP+P," although it took until 1974 when SAAMI officially cataloged the .38 Super as the ".38 Super +P." The reason for the new name, even though the case was identical, was to keep this hotter ammo out of Model 1900/1903 Colts. Instead, it was offered for the Model 1911A1, which could easily handle the more powerful, Super version of this cartridge.  Here is an early commercial Colt M1911A1, or Government Model, chambered for the .38 Super: 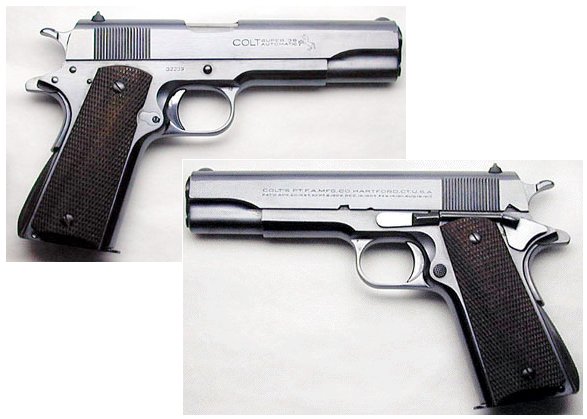 Ballistics were 130gr FMJ at around 1215fps, much hotter than the .38ACP's 1040fps with the same bullet. The power was enough that lawmen of the day looking for more power than the comparatively feeble round nose lead bullet .38 Special revolvers often chose either the Super or the .45ACP. The Super was favored because cops felt it was the best bet in a handgun for shooting through the car bodies of the day. In the 1930s, auto 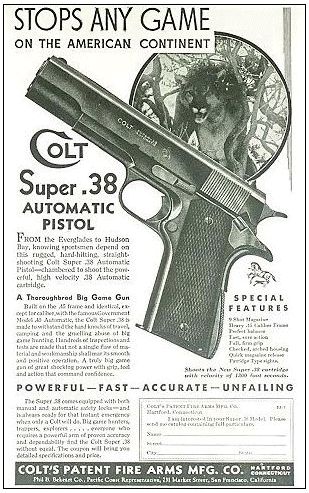 bandits were all the rage among crooks.  Rob some small town bank in the Midwest and flee on the hundreds of back roads throughout this part of the country.  Colt's advertising (right) vaunting the Super as a hunting round capable of taking any game in the country (somewhat optimistic) didn't hurt in encouraging its use either.

Why didn't the Super continue to grow in popularity? Number one reason was the introduction of the .357 Magnum cartridge in 1935. Smith & Wesson had experimented with hot .38 Specials, loaded as hot as today's .357 Magnums, but in .38 Special cases, and marked ".38 Heavy Duty," or .38-44, to signify that these .38 Special loads were only appropriate for the guns built on Smith & Wesson's large .44-size frame, that which we refer to as the N-frame today. At some point someone got the good idea that if they simply lengthened the .38 Special case .1" 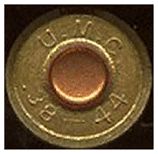 they could avoid liability for when the inevitable nitwit tried to shoot .38-44 ammo out of a small frame .38 Special not up to the task of containing what were easily double the pressures.  .38-44 ammunition looked like any other .38 Special and was simply headstamped as ".38-44."  (See photo at left.)

So--when the .357 Magnum came along, chambered in the revolver that most cops preferred, the .38 Super fell by the wayside.

There was a secondary problem with the Super. Unlike most semi-auto cases which are truly rimless--meaning the rim doesn't extend out past the body diameter, the Super's did.  It was not a wide rim as found on a revolver case, but rather what we call a semi-rim.  (Examine the cartridge drawing in the title image and you can see how the rim is wider than the body of the cartridge.)  This was done apparently so the case could headspace on the rim. This was not a good idea!

Most semi-autos headspace on the case mouth (which, for you handloaders, is why auto rounds should never be roll-crimped). Headspacing on the case mouth is much more reliable. Besides reliability problems, accuracy was often quite poor in Colt Supers. It took decades of building Colt .38 Super pistols that headspaced on the vestigial rim before Colt suddenly woke up and changed their method of headspacing to the case mouth. Custom barrel makers had for years been offering this sort of barrel, with great results, but Colt has always been a bit slow on the uptake, corporately speaking.  (Just my opinion!)  Colt finally changed to the superior headspacing method in 1985, but the important thing is that any currently offered Colt Super will properly headspace on the case mouth), but by that late date the Super was popular only with a relatively few shooters.

Probably the only thing that kept it alive for those decades was its popularity in Mexico, Central, and South America where it was the most powerful pistol cartridge that was not a military round. Those countries almost all adopted the .45ACP for their police and military, and banned private citizens from owning military calibers--thus the .38 Super was common, chambered mostly in Colts and Spanish copies and near-copies of same--Llamas, Stars, and Astras.

In the late 1980s the Super gained a new life when it was discovered by IPSC gamesmen who found they could "make major" with the Super, yet enjoy the reduced recoil of shooting it compared to the .45ACP.  (175 power factor*, vs only 125 being required to make minor--and minor calibers are scored lower for the same hits.)  They could also stuff as many as 18-20 rounds in their fat double-stack magazines.  Fewer reloads, faster times--what's not to like?  The problem came when many shooters ended up blowing up their guns by over-loading Super cases in order to make major, using 1911-style pistols with non-ramped barrels--meaning not fully supported chambers.  The term "Super Face" became well known in that sport.  Ouch.  Changing to ramped barrels helped a lot, but I believe IPSC has mostly moved on to other rounds, the .40S&W for example, which makes major more easily--and safely--due to heavier bullets.

Still, a few folks have always liked the .38 Super for self-defense, and pistols have always trickled out of the factories for these people. I have a .38 Super barrel for my Colt Government 9mm, but haven't managed to get 100% reliability at this point. I wouldn't carry a 1911 anyway, so I'm quite interested in a Super in a gun I would carry--like the double action Taurus PT38S shown below. 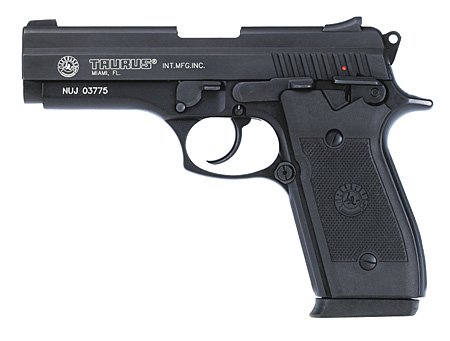 Is there a real place for the Super today?  Not really. The much more mainstream .357SIG (a 9mm despite the name) does everything the Super can do and does it in a more compact pistol.  You can even get 9mm+P+ with similar performance to the best .38 super factory loads--which are not all that good.

The 9x23 Winchester is a better round for those who don't mind it requiring a pistol with a .45 frame, like the 1911. The 9x23 is a true rimless round and uses a heavier cartridge case--though it looks like a .38 Super if you just do a quick comparison.  The photo of the two cartridges at right are a Super in the nickel case, 9x23 in the brass case.  While companies like Cor-Bon have loaded the .38 Super to 1250fps+ using a 125gr JHP and to 1350fps+ with a 115gr bullet, the 9x23 can easily best that in a proper pistol by 100fps minimum, perhaps even 200fps.

So--any interest in the .38 Super in this country, where we aren't prohibited .45ACPs, etc., is pretty much because we just really like it.  But that's as good a reason as any....