There seems to be confusion among some defensive shooters about the .357 SIG and .357 Magnum cartridges. Hopefully this short article will clear up any questions you may have. 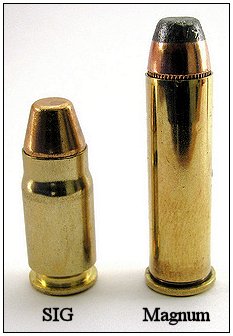 The .357 Magnum dates back to 1935 and is a standard, rimmed revolver cartridge. It was developed by lengthening the existing .38 Special case by 1/10th of an inch. While there had been high power .38 Special loads (the Smith & Wesson .38-44 "Heavy Duty," a large frame revolver, was intended for these hot .38 Specials) prior to the development of the .357 Magnum, these were loads that we'd call "+P" loads today. It was decided that it was too risky to simply load the.38 to these higher pressures given all the weaker revolvers in use at the time, so the .38 Special case was lengthened by 1/10th of an inch and the new cartridge named .357 Magnum. "357" in the name refers to the true bullet diameter of .357 inches. This bullet diameter is used in both the .357 Magnum and the .38 Special, despite the ".38" in .38 Special. (The reason for the use of "38" is another story!)

Over time, the .357 Magnum cartridge has been loaded with bullets as light as 110 grains and as heavy as 180 grains, with the standard bullet weighing 158 grains. While one can handload lighter or heavier bullets, these extremes represent the usual factory loadings. The Magnum is actually efficient with any of these bullet weights, as the case capacity is sufficient to hold enough powder to make even the heavy bullets effective when used on proper targets. In recent decades, the 125gr. bullet has become the preferred weight for law enforcement and self-defense loads. Heavier bullets increase recoil to levels that make managing the guns difficult for most people. Lighter bullets tend to suffer from lack of sufficient penetration against human targets.

From a standard four inch barreled service revolver, the 125gr JHP (jacketed hollowpoint) .357 Magnum loads will achieve a velocity of about 1400fps (feet per second). In shorter barrels, as preferred by many for concealed carry, these loads will still achieve approximately 1250 to 1300fps, depending on exact barrel length. The problem with using full power loads in short barrels is that muzzle blast (noise) and muzzle flash is excessive, however, and new, slightly reduced loads, like the Remington Golden Saber 125gr JHP, will perform almost as well with less blast and flash in short-barreled guns. The Golden Saber is a decent choice in the service length barrels too, for those who can't tolerate the recoil of full power loads.

The bottom line is that the .357 Magnum, using a 125gr JHP bullet, has proven to be a very effective anti-personnel round. The bullet in these loads, by the way, is normally semi-jacketed, with a good deal of exposed lead at the nose. This exposed lead along with a hollowpoint facilitates excellent expansion in flesh, and this type bullet is the one that made the reputation of the .357 Magnum as an excellent anti-personnel round. (I should note that the Golden Saber bullets mentioned above do not share this common trait among .357 Magnum bullets, however, but are designed with jacket material continuing over the edge and into the hollowpoint, more like the average auto pistol bullet.)

Let's talk about the .357SIG. This is a new cartridge dating from 1994. The case is a rimless auto pistol type, and has a bottleneck. It is for all practical purposes a .40S&W case that has been necked down to .355" diameter to use 9mm bullets. Did I say .355" diameter? And 9mm? Yes, despite the name, the .357SIG is a 9mm. The "357" in the name of this cartridge does not specify the bullet diameter as it does in the Magnum round, but was named this way so that it would automatically be compared to the Magnum round. So far, this marketing ploy seems to have been effective, as many people seem to think the .357 Mag and .357SIG are identical when it comes to performance.

Is that really so? The guns are a bit different. The .357SIG is made primarily in one bullet weight, 125grains, because of the effectiveness of this weight in the Magnum round. (Recently some loads weighing 147 or 150grs have appeared, with lower velocities.) Actual velocities out of the three to four inch barrels common in .357SIG-chambered auto pistols is around 1300 to 1325fps, although factory specifications often state higher nominal velocities. The barrel length used is a limiting factor for the SIG round. You must remember that auto pistol barrels are measured to include the chamber length, while revolver barrels exclude the chamber length and only measure barrel leade and rifled bore. Thus the four inch revolver barrel as common in .357 Magnums is more like a five inch auto pistol barrel, and conversely a so-called three inch auto pistol is similar to a two inch revolver barrel. (This assumes a cartridge with an overall length of an inch. The exact cartridge length determines chamber length, and that in turn determines the exact length of an auto pistol barrel.) Barrel length always determines the velocity of a given cartridge. Longer barrel equals higher velocity.

The other major performance-related difference between these two cartridges lies in the design of the bullet. In order to feed properly in an auto pistol, the bullet cannot have the exposed lead nose common in .357 Magnum bullets. This does in fact affect performance, as expansion is absolutely not going to be as great with a bullet having the jacket rolled over into the hollowpoint.

There is a third difference between the .357 Magnum and .357SIG, and that is the aforementioned fact that the revolver round can be used with a wide range of bullets loaded to a wide range of velocities, in order to accomplish a large number of uses to which the gun may be put. The .357 Magnum is as comfortably at home on the target range using middleweight bullets at low velocities or in the hunting fields using heavy bullets at mid to high velocities as it is as a self-defense round using light bullets at high velocities. Due to limited case capacity, the .357SIG is not by any stretch of the imagination a versatile cartridge like the .357 Magnum-but it doesn't purport to be. It was designed as a self-defense round, period, to be used with one bullet weight, period.

So while the .357SIG is not nearly as versatile and not quite as ultimately powerful as the .357 Magnum, it is still a viable defense round, and it offers a couple of very real advantages over the Magnum in the self-defense realm. The first is that given similar velocities, the SIG round usually is easier to shoot, with less recoil and less muzzle blast. Flash is not a factor of a given cartridge, but a factor if the powder type used. The second advantage of SIG is that the pistols chambered for it hold more rounds, normally ten in these post-ban, "Clinton" magazine days, and up to sixteen rounds or so if pre-ban magazines or restricted law enforcement magazines are used. While only law enforcement can purchase new-made high capacity magazines, most pre-ban, high capacity magazines intended for the .40S&W cartridge will handle the .357SIG cartridge as well, since the base size and overall length is the same between the two rounds. So, given the similar (but not identical) performance of the 125gr .357SIG and the 125gr .357 Magnum, having many more rounds in the gun without it being any larger is a decided advantage.

Frankly, the .357SIG won't likely replace the .357 Magnum, and the reason doesn't really have anything to do with the cartridges themselves, but has to do with the handguns in question. Most people will choose a defensive gun based on type first: revolver or autopistol. These days the auto is more popular, but the revolver is still an excellent choice for those who prefer the type. When you consider that according to FBI stats in recent years the average gunfight only sees about three rounds fired in total, a revolver holding five or six rounds will probably be all one needs--or so the revolver folks will tell you.

If you like auto pistols and prefer lots of rounds in your gun, choose the .357SIG, or choose another of the small to mid-size cartridges that can be had in high capacity pistols. If you like revolvers and want one of the highest-powered yet still practical handgun cartridges on your side, choose the .357 Magnum. Neither is a bad choice. Just remember that the .357SIG isn't the SAME as the .357 Magnum. They have distinct personalities, and different capabilities. They each have their strong points, and they each have their weak points. As long as you know what those strong and weak points are, you can make an informed decision, and that's what counts.