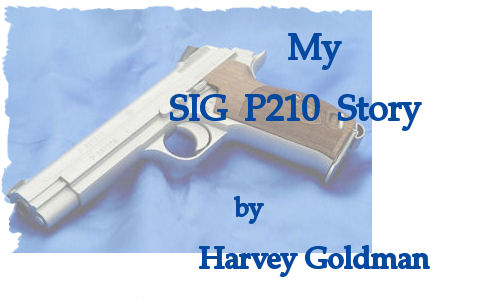 My first experience with the SIG P210 was in purchasing a Swiss military model (SP-49, later M-49) from a business associate. He was a reservist in the Swiss Army, and was being issued a new pistol (the M-75), and he was kind enough to offer me his old sidearm. When I finally received it, after going through numerous and painful import hoops, I was truly impressed with the fit and finish, and lack of wear that this 30-something-year-old veteran showed. I was also impressed with the accuracy of this pistol, out to 50 yards, considering it had fixed sights.  That began my interest in the SIG P210 pistols. I did some research after that, finding that the design was heavily influenced by Charles Petter’s French military pistol, the 7.65mmL caliber (a basic copy of the .30 Pedersen Device round used on Springfield ’03 rifles)) SACM Model 1935A. That pistol used a modified Browning locking system (Browning Petter System), a modular fire control unit (hammer, sear, mainspring) similar to the Tokarev, and a slide that rode on the inside of the frame. Most of these features were included in the final SIG design. 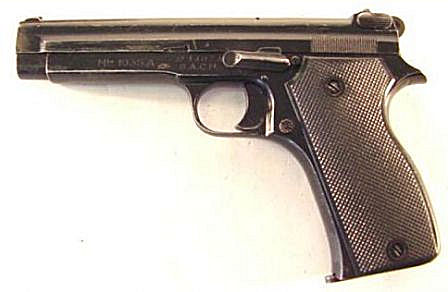 RIGHT: French Military Model 1935A, produced by S.A.C.M. prior to WWII. This was a design using the Browning Petter locking system, and was chambered in 7.65L caliber. This round was a basic copy of the Pedersen Device cartridge developed to convert the Springfield '03 to a semiautomatic configuration.

SIG in Switzerland purchased Petter’s patent in 1937 and began research to develop a replacement for their military’s M06/29 Lugers. They developed a number of designs over the years, using the Petter patent as a basis, in both single stack (finalized as the SP47/8) and double stack magazine (finalized as the SP47/16) models, then submitted the single stack design for the final trials against another Swiss arms maker. It was adopted by the Swiss military, and designated SP49. At the time, it was the most expensive military pistol yet adopted, but like many Swiss firearms, it probably was also the most accurate. It is an all steel 9mmP pistol (although it also was chambered for the .30 Luger, and just requires a barrel change), weighing in at about 32 ounces, has a barrel length of 4.75 inches, front and rear dovetailed sights than can be drifted for windage, and has a magazine capacity of 8 rounds. Early military models had checkered wood stocks, and a high polished blue finish. They had a Euro-style magazine release, which was one of my least favorite features of this otherwise well designed pistol. The military pistols had a serial number prefix of “A”. 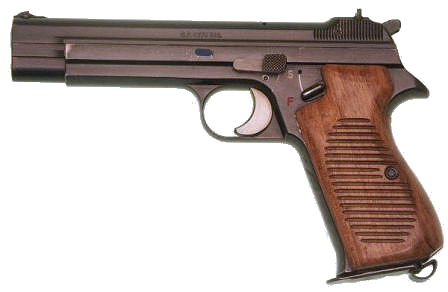 LEFT: This is the original military version of the 9mmP SIG SP49 ("Self loading pistol Model of 1949"), first produced for the Swiss military, and issued beginning in 1949. It was later produced as a commercial pistol identified as the P210. It is a single action, all steel pistol, with fixed sights, and a magazine capacity of 8 rounds. Probably the most expensive military pistol ever produced.

The only other military to adopt this pistol was the Danish Army, who designated it as the M-49. Several police organizations in Switzerland and Germany also adopted it. Unfortunately, the high cost of manufacturing it resulted in sales prices much too rich for most militaries.  The design was later made into a commercial product (serial number prefix “P”) in the mid-‘50s, and designated it the P210-1, which featured a polished blue finish. While my interest in these pistols was high, I never came across a P210-1, but I did manage to find other P210s, all of which had matte finishes. At one time I had five P210s –including a 210-5 Target model.

BELOW:  The SIG P210-5 Target Pistol. A 9mm single action pistol, with a 150mm barrel and adjustable sights. 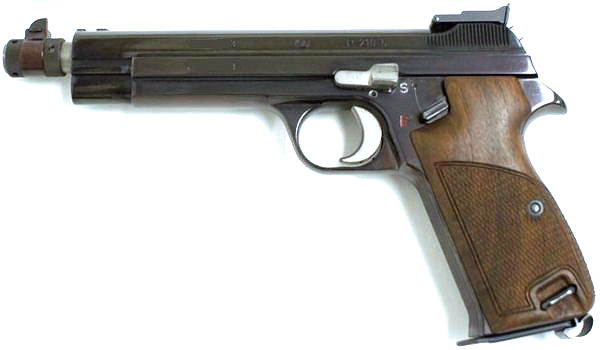 Whether with fixed sights, adjustable sights, or a target model, these were the most accurate center fire pistols I’ve ever owned. Also, they had very smooth trigger pulls, ranging from about 3.75 pounds to about 4.25 pounds. The commercial models were also available in 7.65mmP (.30 Luger) for some time, and a .22LR version was also produced. Because of the grip shape and angle, and the barrel length, the pistols were very balanced and easy to aim. Some would describe it as a “natural pointer” a la the Luger. I only fired full metal jacket ammunition in my P210s, so I have no idea whether they would work well with hollow points. I cannot recall ever having a malfunction with any of my P210s, as they were extremely reliable. I did, however, clean them after every range visit, which may have been a bit obsessive. The only negative I can recall about the P210s was the scratch created on every one of the frames by the manual safety, which, like on the Nambu Type 14 pistol, was almost a trademark.  The line of P210 pistols was discontinued in 2000 when SIG was purchased by another entity. However SIG Sauer resurrected the line, and now is offering them again in the US. These pistols are produced in Germany, using the SIG documentation, but incorporating a few updates like an extended tang, an American-style magazine release, a more user-friendly manual safety, and a modified magazine well. They also produce a heavier framed version.  I sold my five P210s at the time I retired, along with a number of other SIG Sauer pistols, and have no regrets in sending them to new homes. It was great fun when I had them, and I enjoyed shooting them. 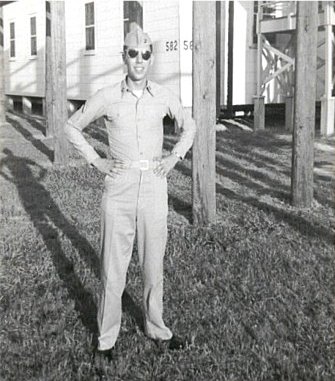 Author Goldman at retirement, and in a different era as an Airedale Marine.