(Editor's note: Everyone form the NRA to dozens upon dozens of You Tube videos have made a point to correct those who still misuse these terms.  We decided we needed to do the same.)

I am frequently surprised that even long-time, very knowledgeable shooters still don't seem to distinguish the difference between clips and magazines.  In brief, a clip is something which will hold ammunition, but it does NOT also feed ammunition during firing as a magazine does.  Typically a clip will have no moving parts, whereas a magazine will have a movable follower which is normally powered by a spring. 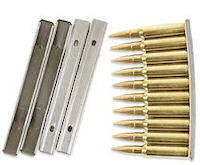 At left is an example of one type of clip.

The clips shown at left are used to load magazines for AR-15s and similar rifles.

On the right is an example of the magazine that they work with.

Clips which are used for the M1 Garand may seem to bridge the gap between clips and magazines, but in fact the magazine of the Garand is internal to the

rifle and the clip simply stays in the rifle until it is empty.

Hopefully, this clears up the misuse of the words “clip” and “magazine” as they pertain to shooting!

Copyright 2012 by the author and FirearmsForum.com, all rights reserved.