Should we use safeties on Defensive Handguns?
by Mark E. Freburg

There has been some discussion on this forum's message board regarding the use of active mechanical safeties on defensive pistols so equipped.

In times past I was all for a “pull & go” pistol as long as it had a consistent trigger pull from first to last.  Traditional double action pistols (TDA) had a long and heavy pull for the first shot, with subsequent pulls being short and light.  Now then, I managed to master this type of trigger.  I don't believe it is very difficult with practice, certainly not deserving of the gnashing of teeth that many single-action (SA) shooters would have you believe.  (For more on shooting a TDA well, see my article here in this forum.)  But when double action-only (DAO) versions of these pistols were announced, I was anxious to try them. As one who started out on double action (DA) revolvers, I "knew" I could shoot those fast with good accuracy.

It turns out that the first generation DAOs were not very good.  They were simply the same as their TDA brothers without the ability to stay cocked.  That meant we had a 10-12 pound trigger for every shot. But unlike a revolver, the shape of the pistol and the arrangement of your hand on the pistol is different, and it is hard to shoot well with a 10-12 pound trigger on those first gen DAOs.  Up close, not so bad, out at distance, pretty tough.   I had purchased an S&W, because S&W had shortened the hammer throw on their DAOs, meaning the trigger was slightly lighter, all to the good.  Still, while slightly better than the Beretta and other first gen DAOs, I quickly realized that I could still do much better work with the TDA.

Second generation DAOs were lightened.  Mostly these were new guns, not the same old TDAs, which at that point were phasing out, like the S&W. SIG Sauer remained, but came up with an all-new trigger, called the DAK, which stands for double action Kellerman, after the SIG designer who came up with it.  This allows for a DA pull which can be lighter or heavier, depending on how you pull it.  Makes sense on the range, not so much in a life or death situation, or so it seems to me.

The best “DAO” pistols didn't arrive until the striker-fired pistols did.  Instead of a hammer, the striker-fired pistols cock the firing pin, or “striker,” directly, then release it to fire.  In some guns the striker is pre-cocked by the racking of the slide, then finished cocking with the pulling the trigger.  In others it is entirely cocked and then released via the trigger.  So technically some of these guns are DAO and some are more correctly SA.  The bottom line however is that they feature a very light trigger pull that is the same every time.  This type of pistol is very popular now.  Add in the true SA, hammer-fired pistols, and we have the consistent trigger pull pistols available today.

Now then, let's talk about safeties, active and passive.  Passive safeties are those which don't require any action by the shooter. All good pistols made today have one or more passive safeties as currently produced, even if not originally designed that way.  These may include firing pin blocks, which will not release the striker/firing pin until the trigger is pulled, or until a grip safety is squeezed.  They may include drop safeties that work via a wide variety of mechanisms. 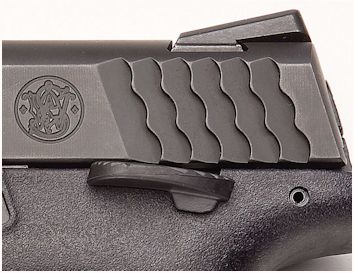 Another feature considered a passive safety is a device that disconnects the trigger from the linkage to the hammer/striker if the magazine is not in place.  These types will not allow a round loaded in the chamber to fire.

Active safeties include the thumb safety, which must be moved on/off by the user to work.  When on, these usually block hammer and sear movement, and sometimes block the slide itself.  On SA pistols, a thumb safety is just a safety.  On TDAs you will find a combination decocking lever/safety.  Once you load a round into the chamber and run the slide forward, you must decock the hammer by flipping the decocking lever (makes differ in the proper direction).  Sometimes the decocker/safety snaps back into the off-safe position, sometimes it remains in the safe position until you purposefully off-safe it. Other TDA pistols, of course, do not feature a safety, and their decocker simply decocks, period.

I mentioned above that the grip safety was part of a passive safety system.  While it requires deactivation by the user's hand, this is simply part of the grip, not something requiring conscious thought, thus I call it passive.

Previously, I used to think that a pistol that was point and shoot was definitely the way to go.  The less you have to think about in the middle of being attacked by a violent criminal intent on hurting or killing you the better, right?  If you've studied this at all, like many of you have, you know that our fine motor functions will diminish in fight for our life.  We will have tunnel vision, we will have diminished auditory capability.  Do we really need to bring into this crazy equation the need to off a safety before we can defend ourselves with our pistol?  In the past I said no.

But how about the chance our attacker should get our gun away from us? After all, a deadly force attack can come via a knife, a club, or fists—or multiple attackers.  We may be legally and morally justified to use our handgun even if ours is the only one present. If that is the case, the chance that our attacker may try to get the superior weapon away from us is even more likely.

I thought about this then and I think about it today.  When I was younger I confess I did not think a great deal about multiple attackers, and when I did, it might be two, three at the outside.  I had some training in firearms retention as a policeman, I am not small and weak, and perhaps most important, I operate in no less than Condition Yellow (See Cooper's Color Codes article, this forum).  And I always figured the surprise factor, meaning a bad guy sneaking up behind me and grabbing for my gun, was just incredibly unlikely.  Besides, I carry concealed, and I'm discreet. Who is going to know I'm armed?

Actually, career thugs, those who've done time, do look for tells, and don't kid yourselves they don't.  They learn these things in prison, even jail.  They also practice things like gun takeaways.  Thugs operate in Condition Yellow, even Condition Orange, much of the time.  While they may not always be looking to commit a crime, they are always scanning for a cop.  Then there is me personally—and that's the only person I can decide for, you make the call for yourself.  I'll be 60 in 2015.  When I adopted the Glock I was not quite 50.  I've lost a step, not mention agility and strength.  I can still shoot, and I still operate in Condition Yellow, minimum.  But the 20- and 30-something thugs I worried about 10-15 years ago still concern me, and they are still 20- and 30-something.  That gives them a much better edge on me.  I believe all this adds up to a good reason to carry a pistol with a proprietary safety, and with the safety activated.

Obviously this usually means a thumb safety, or on TDA, a decocker/safety. While this is not what many of you want to hear, if you accept the fact that you could be a mark, please accept that making your gun proprietary to you adds a sliver of personal safety.  If you lose your pistol to an attacker and he momentarily cannot make it fire, you may have time to pull a back-up pistol or a knife, or you be in position to run away--the best option.

With guns that feature a magazine disconnect feature, which is to say that without a magazine in place the pistol will not fire, you may be able to take advantage of that by hitting the mag release button during the a struggle over your gun.  By dumping the magazine you have rendered the pistol unable to be fired.  If the attacker takes the time to bend over to retrieve the magazine, you again have opportunity—to draw your back-up, to kick him in the head as hard as possible, or again, to run away if that seems best.

All my carry guns do not have active safeties.  I carried Glocks for about six years, I guess.  But as I was and am so familiar with the M1911 platform and “cocked and locked,” I recently adopted the CZ P07, which is also an SA pistol and is carried cocked and locked.  I have other action types and when I carry them, if they have optional safeties, like a Smith & Wesson Third Generation auto, I will carry it loaded chamber, safety on.  If this seems complicated to you, think back to the description of the gun fight earlier in the editorial and please consider this.

One other thing that is so very true about fighting with a pistol—or anything else under extreme stress—is that you will revert to your training and your practice.  Those are not the same thing, training being the instruction you've had and practice being the repeated application of those lessons until they become second nature.  You've no doubt heard that before, about practicing until something becomes second nature?  With shooting we often refer to it as muscle memory.  When applied to using your firearm to fend off an attack on your person, it means that while you will be experiencing all those physiological shutdowns mentioned above, your ability to handle your pistol and shoot it well will not be compromised because that ability has been absorbed into your subconscious.  And yes, of course this suggests that it behooves us all to practice with our defensive firearms!  (See the article "Muscle Memory" in this forum).

To fall back on seemingly “simple” guns because you just know everything is going to go crazy in a gun fight and the simpler firearm the better is not neccessarily the most logical response to the problem of choosing the proper handgun for your needs.

UPDATE December 2014: After living happily with the CZ P07 for over a year, I've finally reverted to carrying an actual 1911 pistol.  With the right holster and belt, I can carry a full-size all-steel 1911 in complete comfort, even as a man approaching senior citizenship.  I have a mid-size and compact 1911 as well, the compact in 9mm as I'm not as confidant of the .45ACP in ultra-short barrels.  But bullet performance is a topic for another day.

Update July 2019:  I continue to carry the 1911s I mentioned five years ago.  There is no reason not to carry a competent firearm, and too many reasons one should not carry an incompetent firearm.