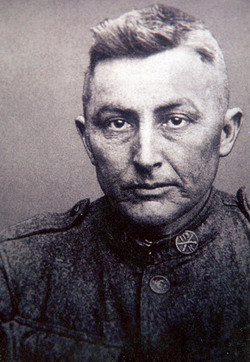 America was late in entering the Great War, not getting any troops "over there" until June 1917, and not any real numbers until October of 1917.  Yet by May of 1918 there were over a million American troops in France, at least 500,000 on the front lines.  While it had taken the French and British a long time to get up to snuff in the sniping game--something the Germans had been prepared for from the very beginning, the Americans took advantage of their Allies' experience and fielded snipers right away.  The downside was that they had delayed and delayed on getting proper sniping rifles into the field.  (In point of fact, the final American solution was a Winchester A5 mounted on an M1903, but the final rifle wasn't even approved until two months or so after the Armistice.)

The upside with the Americans was that many soldiers were highly experienced riflemen.  I should interject here that, unlike the modern belief that all Americans of the time could shoot, that simply wasn't the case.  Read writings of the time and you'll find authors of the day bemoaning the fact that riflemen simply were  no longer to be commonly found among young men of that day.  A good example of this can be found in Townsend Whelen's The American Rifle, written and published in 1917.*  Yet there were some fine rifle shots among the men from many of the rural states, where city life had not spoiled riflry as a natural art to be learned by young men coming of age in the new 20th Century.

A splendid example of such men was of course Alvin York of Tennessee, but let me tell you about another young soldier named Herman Davis of Arkansas.  Davis was not a sniper by training or assignment, and darn near missed the war altogether.  At age thirty, the Army initially rejected Davis for service because he was considered too old, and because he was only 5'3" tall, but eventually was able to convince the authorities to let him join up.  It turned out to be good for the Army as Davis was a good soldier.

Davis' claim to fame came while he was in the line and serving as a regular infantryman.  A German machinegun nest was particularly troublesome.  Davis asked his fellow soldiers why no one was doing anything about the gun.  He was told that the gun was 1000 yards distant, far to distant to deal with.  Davis replied "That's jest a good shooting' distance."  Taking aim, he proceeded to shoot four German gunners with his rifle.  Davis' amazing shooting skills earned him a permanent position as company scout/sniper, and he began a solo campaign  to eliminate all the Germans he came across.

It isn't known all what Davis accomplished after that as he worked mostly solo and most his record was never recorded, much like many Americans in that long ago war, but a few incidents he mentioned privately to friends after the war were quite remarkable.  In one advance Davis moved through the lines to within fifty yards of the German lines and managed to shoot eleven Germans as they came out of their dugout to man their machine guns.

In another battle at Verdun, Davis' company came under heavy fire.  Davis crawled into No Man's Land until he could find a point where he was able to find a firing position overlooking the Germans, then carefully shot every member of the German gun crew.   Unlike the majority of Davis' shooting feats, this one was witnessed by an American officer, and Davis was subsequently awarded the Distinguished Service Cross.  Later during that same advance Davis managed to shoot another 26 Germans, mostly machine gunners.

It seems machine gunners were a favorite target of this soldier.  Over the course of his career he managed to also pick up the Medaille Militaire and Croix de Guerre with the Palm Leaf and Silver Star, so Herman Davis ended up being well rewarded for his work as a sniper in the Great War--yet few have ever heard his story, however short.  It is one well worth telling.

* It is dead common to hear modern gun people talk about young male citizens of the WWI era as all fine shooters, but I've read multiple books written during that era and am convinced that this belief is pure and unadulterated horse puckey.